A crypto scam attempt is made every four minutes

According to a recent survey, the most common scam in the cryptocurrency industry is rug pulling. Rug pull tokens are designed specifically to defraud small-scale investors. Their smart contracts frequently contain code that prevents secondary sales, permits developers to create new tokens, or imposes 100% sell costs on buyers. These tokens work together to steal hundreds of millions from cryptocurrency users invisibly.

How a crypto rug pull is put together

Rug pull tokens adhere to the fungible token standard of the corresponding blockchains and, in most ways, are identical to any other cryptocurrency. In their source code, they diverge. However, the underlying smart contracts of scammers’ tokens can now be altered in dozens of different ways. To carry out rug pulls, con artists first hard-code exploitative conditions into the smart contracts of their tokens, giving them extra authority or depriving their buyers of fundamental rights. The token contract is then deployed or published. The fraudster then establishes a liquidity pool on a decentralized exchange following the deployment of their phony cryptocurrency (DEX). This creates a trading pair between that token and a more widely used, reliable cryptocurrency, such as Ethereum, but not only Ethereum, as you can imagine. They then create an artificial transaction volume to raise the perceived value of that cryptocurrency.

By creating a promotional website or roadmap, disseminating fictitious collaborations or the names of “doxxed” developers, and using social media apps like Twitter, Discord, Reddit, Telegram, or others to advertise, DeFi scammers may be able to entice even more investors.

The scammer sells off their rug pull token holdings in return for the increased number of authentic tokens in the liquidity pool once enough users have purchased the fake token. Bringing the token’s price to zero completes the rug pull.

Scammers programme their cryptocurrency tokens in a variety of ways to fleece investors. The following lists the three most common DeFi scams: balance modifiers, hidden mints, and honeypots. 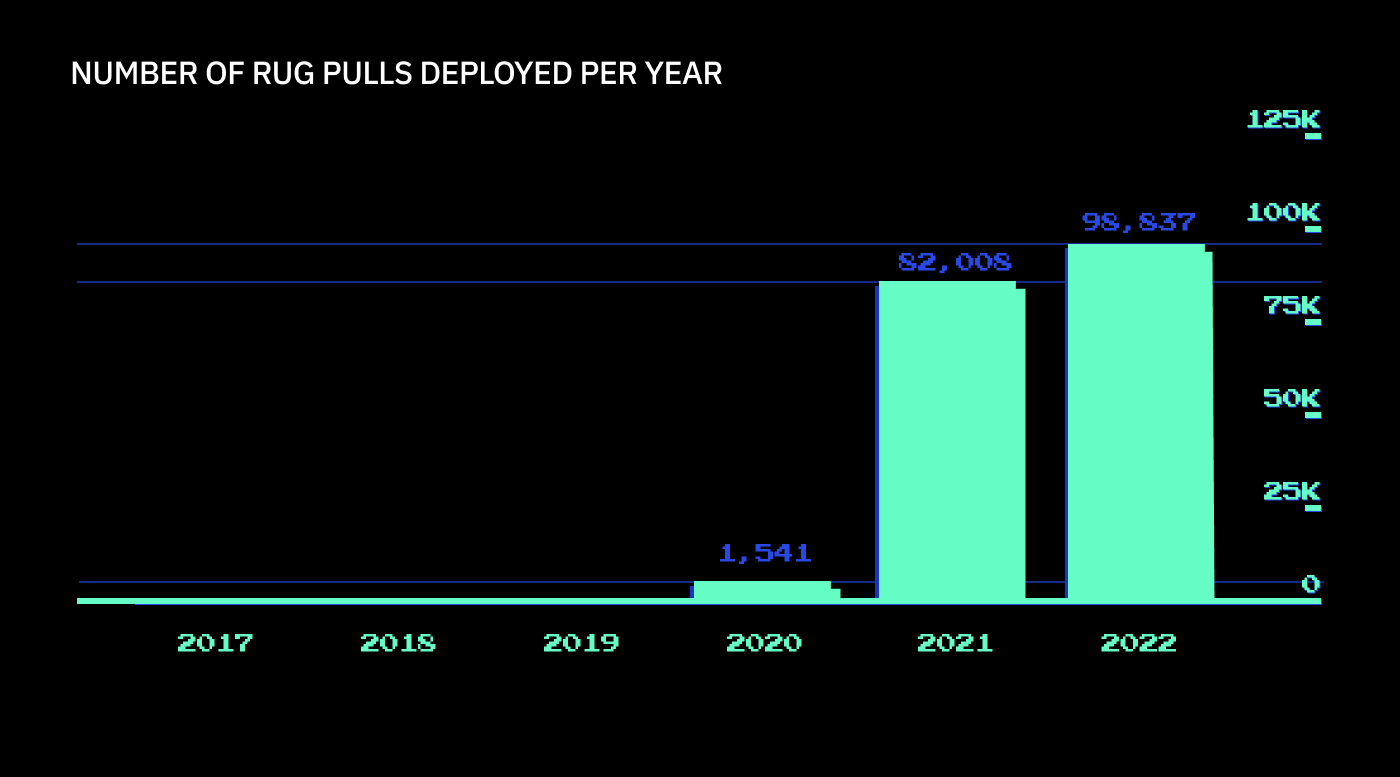 Any vulnerability that stops token purchasers from reselling the token is known as a honeypot. Due to the difficulty in selling, the token’s price rises, giving the impression that it is “mooning,” which deceives additional users into buying.

The token from the Squid Game is the most well-known instance of this exploit (SQUID). SQUID took use of the popularity of the corresponding Netflix series to integrate a honeypot exploit in its deployment contract, giving the impression to many investors that it was a promising meme currency, similar to Dogecoin or Shiba Inu. Investors paid approximately $3.36 million in a matter of days purchasing SQUID, and the developers took advantage of this situation to flee with the money.

An attack is known as a “hidden mint” enables one or more externally owned accounts (EOAs) to create new tokens by utilizing a token contract’s secret function. After invoking the mint function, the con artist dumps the extra tokens on the market, making the tokens that users already own worthless. Honeypots frequently come with hidden mints.

A hidden balance modifier is a flaw that enables one or more EOAs or the contract itself to change the balances of token holders. Selling is impossible if the EOA resets holder balances to zero. The con artist then eliminates liquidity or creates/sells tokens to close the con.