Whether it was extremely secure US Treasuries or the riskiest developing markets, global stocks and bonds have lost a record $36 trillion in value over the past nine months in a chaotic selloff that affected assets across the risk spectrum.

There is probably yet more suffering to come as the year enters its final months. In full firefighting gear, central banks have made it clear that they want to raise interest rates even more to combat inflation, even if doing so results in an economic downturn.

One might be excused for keeping cash under the mattress based on how it seems. In fact, respondents to the most recent Bank of America Corp. fund manager survey claimed their exposure to cash was at an all-time high.

The liquidity downturn has essentially been like hitting the reset button for markets whose valuations were at multi-year or even recorded highs at the beginning of the year.

David Dowsett, global head of investments at GAM Investment, claims that we are witnessing a political and economic transformation of the world, with the patterns that are already emerging expected to continue for the remainder of this decade. We are going through an epochal transition called a Zeitwende, as it is known in German.

Let’s now have a look at the harm done to the world’s financial markets this year and provide guidance for the remainder of the year:

Based on the loss in the market value of the Bloomberg GlobalAgg Index and the MSCI All-Country World Stocks Index combined, this year’s retreat surpasses the sharp declines witnessed during the 2008-2009 financial crisis and the 2020 pandemic.

Perhaps this is not surprising given the cash tidal surge that entered global markets during the prosperous years. The $36 trillion markets have lost in the past nine months were amassed over approximately twice that period, between mid-2020 and late 2021, so the rate of value destruction this year is still worrying.

The longest-ever equities bull market has an ultra-accommodative monetary policy as its foundation, which was only momentarily halted in 2020 by Covid. The US Federal Reserve and its competitors are currently demolishing what they helped to create.

In addition to $3.1 trillion in “quantitative tightening” over the last seven months, BofA strategists have recorded 294 interest rate increases since August 2021. They added that the shock from rates and quantitative tightening had hit Wall Street’s “addiction” to liquidity as a result and that the “global stock and bond market cap has cold-turkey fallen.”

Bond and currency volatility indices have served as a leading indicator of the ongoing meltdown. They have been high for the majority of this year, and the ICE BofA Treasury volatility index is getting close to levels reached when the pandemic broke out in 2020. The CBOE Volatility Index, referred to as Wall Street’s fear barometer, is still below levels observed during previous bear markets, though. Some investors are worried because there is an opportunity for it to increase. Among those stating that markets have not yet factored in the potential of a worldwide recession are Goldman Sachs Group Inc. and BlackRock Inc.

No place to hide

Bonds and stocks both saw declines at the same time this year, which happens very rarely. After all, central banks are acting aggressively because inflation is at multi-decade highs. The prognosis for economic expansion and corporate profits is dimmed by rising borrowing rates, high oil prices, and the conflict in Ukraine.

With all of this, the S&P 500 Index and the Nasdaq 100 Index are on course to post their third consecutive quarters of losses, which would mark, respectively, their longest losing streaks since the global financial crisis and the implosion of the dot-com boom. 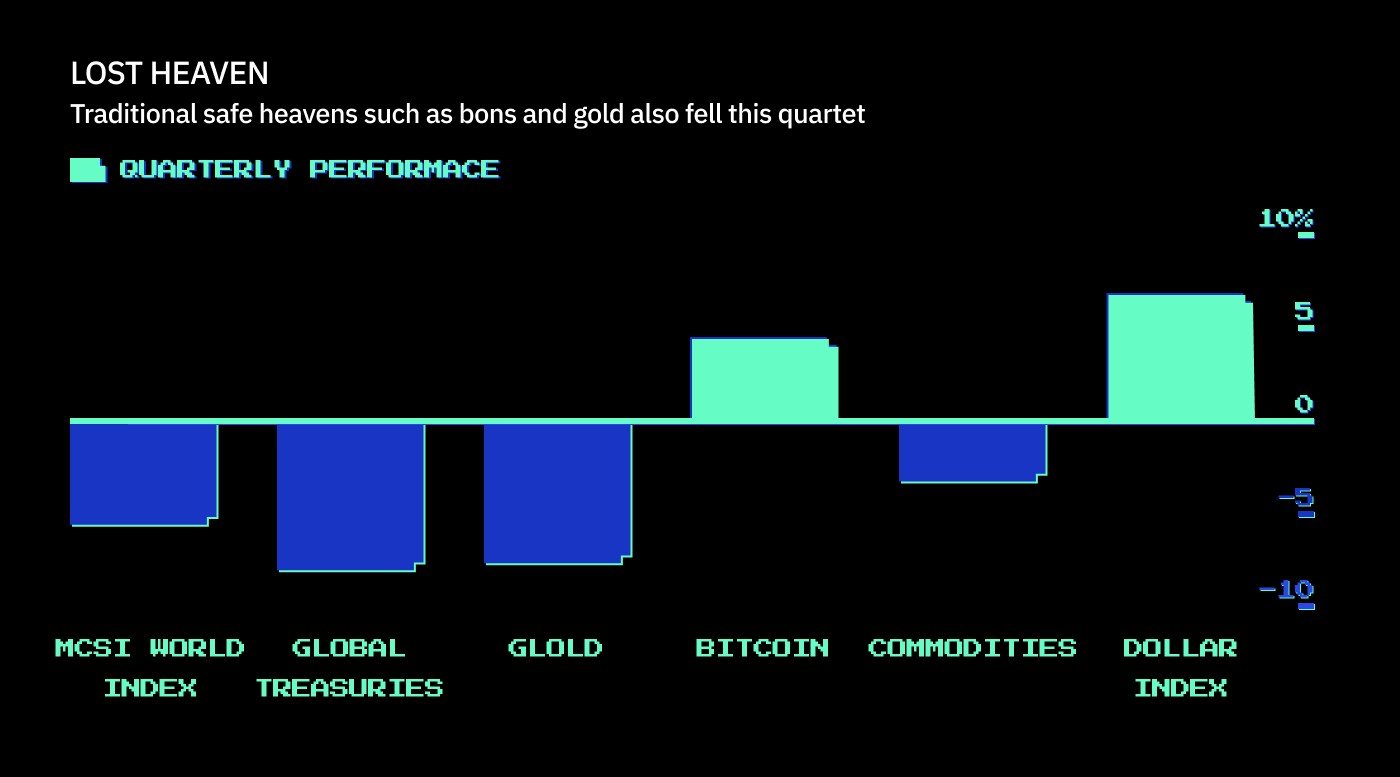 Alternatives include gold and Treasuries, two historically reliable safe havens, but they have also lost value this quarter much more than equities. The only assets with returns in excess of zero are bitcoin and the dollar.

The third quarter will also go down in history as having experienced one of the largest reversals: it was the first time since 1938 that the S&P 500 Index ended a quarter in the red after having increased by more than 10%. According to Michael Hartnett, chief investment strategist at BofA, 2022 will ultimately mark a “painful regime upheaval.”