Following the retail investment boom, Germany pushes itself as an ETF powerhouse

While 2021 was another outstanding year for the growth of ETF assets in Europe, among the record-breaking flows, one market is establishing itself as the upcoming ETF superpower.

It is no secret that Germany has been making progress in the ETF industry, as evidenced by the fact that net inflows into ETFs reached $195.3 billion and assets under management (AUM) exceeded $1.6 trillion.

Blackwater Search and Advisory’s research shows that German investors have the largest amount of assets invested in ETFs, with a market share of 27% ($432 bn), surpassing the UK’s 25% ($400 bn) and nearly doubling its next-largest competitor Italy’s market share of 14% ($224 bn).

Germany is also the third-largest market for domiciled ETF AUM, after Ireland and Luxembourg, both of which are tax havens, with €76 billion in assets at the end of October 2021, nearly twice as much as France (41.7 billion) and Switzerland (37.6 billion).

According to Michael O’Riordan, a founding partner of Blackwater Search and Advisory, all of the ETF issuers are enthusiastic about Germany. As retail investors dive deeper into ETFs, they see it as the next area of growth.

“You may look at what has happened in the US and see it forming in Germany to some extent.”

Although not traditionally a country that invests in the stock market, the growth of the German retail market has been well documented. DIY investors fueled by the coronavirus, a resurgence of self-directed clients who invest in specialized ETF savings plans, and interest in ESG investing are all contributing factors. 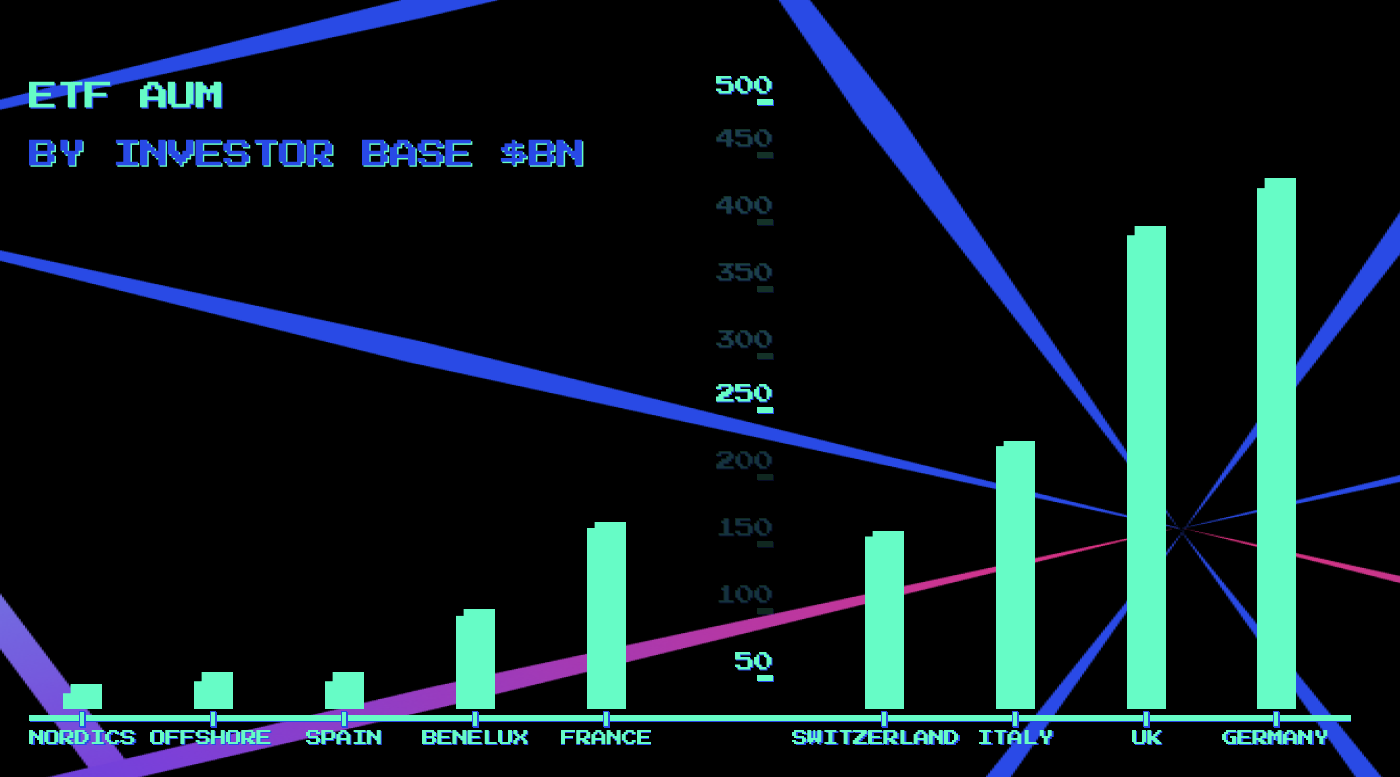 Individual investors can create a flexible and individualized investment strategy using the ETF saving plans, frequently starting with as little as €50 per month. The industry has praised them for being transparent, inexpensive, and simple for do-it-yourself investors to understand.

According to industry estimates cited by Deutsche Boerse, the number of people participating in ETF savings plans increased by more than twofold from 1.3 million at the end of 2019 to more than three million by the end of 2021. In addition, from €166 million per month in 2019 to €589 million per month in 2021, the amount being invested has increased by an astounding 254%.

As Sidi Kleefeld, director of DWS’s ETF sales advisory and strategy put it, “COVID-19 had been a unique growth booster for the category of digital banks, as the lockup had allowed many retail investors time to reconsider their holdings”.

“The V-shaped market rebound following the COVID-19 crisis and the new all-time highs practically all markets have hit has helped to boost investors into the market and consequently into ETFs.”

According to Kleefeld, there is still an opportunity for improvement in Germany’s equity investment percentage.

It is obvious that the German ETF market still has a significant amount of room to develop, given its present trajectory. BlackRock and extra ETF presented research in 2021 that predicted it might increase to nine million by 2025, up from their earlier growth prediction of seven million.

In terms of their distribution plans, all the ETF issuers’ attention is currently focused on Germany, O’Riordan continued. “Retail is the sector of the market where they anticipate the most growth. The retail sector is still highly underdeveloped in other European nations.

According to Caroline Baron, head of ETF distribution for EMEA, it is a market that has increased in importance for Franklin Templeton’s ETF business.

“Retail adoption in Germany has changed significantly from a few years ago, and this segment of the market has been the focus of the strategy. She said, “we had given quite a bit of attention to savings programmes, and we anticipate that this focus will continue to grow”.

Germany has been a major growth market for the company, contributing significantly to the group’s €8.5 billion in inflows last year, according to Christopher Mellor, head of EMEA ETF equities and commodity product management at Invesco.

One significant factor has been the development of trading platforms and neo-banks like Scalable Capital, which have collaborated closely with ETF issuers to help investors build their portfolios.

For the purpose of promoting their ETFs to the expanding investor community, Invesco and Franklin Templeton both claimed to have worked closely with the platforms.

“We have really close working relationships with some of these platform partners, and they have done an excellent job of providing investors with that opportunity and service. Mellor said that we are pleased to collaborate with them to assist investors in learning about all their alternatives.

But the expansion has been happening quickly, which is remarkable. The German digital banks’ ETF AUM increased from €34 billion at the end of 2019 to €71 billion by the end of September 2021, according to DWS, with a large portion of the demand coming from younger investors.

“Recently, there has been a significant rise and demand from German retail investors,” said Jacob Hetzel, head of distribution at Scalable Capital. We notice a lot of interest, especially from younger investors who have access to neo-brokers like Scalable Capital.

According to research by Barkow Consulting and digital asset manager Whitebox, the number of investment accounts being opened is at its greatest level in the last 20 years, with digital banks accounting for 77% of new accounts.

According to Hetzel, “We are sure that the demand for ETFs will remain high and is continuing to rise. “Since ETFs are a cost-effective method of investing money, the current trend indicates a logical progression of monetary investments into a more straightforward and transparent framework. It is simple to invest frequently using ETF savings plans.

Retail still only makes up around 10% of the market in Europe, despite the retail investment boom that is already well underway. It is crucial to remember that the institutional market is where a portion of the German ETF development story has its origins.

Institutional investors have expanded their holdings of ETFs, according to Kleefeld. ETFs are frequently used by companies, pension funds, family offices, insurance, and others. Negative real rates, where low-cost ETFs provide a very tempting offering on the fixed-income side, are what is driving this.

She said that institutional clients who either launched new ESG portfolios or converted existing portfolios into ESG had fueled the “great demand” for ESG ETFs.

According to Kleefeld, many investors have recognized the value of ESG ETFs because they provide a precise set of guidelines for what the ESG index offers.

This is the first time a European market has actually shown signals that it might be fully opened up to retail investors, even though the comparison to the US retail investment market still feels far off.

According to Baron, the Retail Distribution Review (RDR) in the UK caused people to believe that retail adoption would happen soon. “We have made some, but not significant, progress. There has been a significant change in Germany, as we can see”.